Mark Shanahan set himself one goal for 2020: to run 20 marathons by the time the year was over. The already enormous challenge was made even trickier due to the coronavirus outbreak, but that hasn’t deterred Mark. He remains set on his goal, even turning to his garden space in order to rack up mileage.

Like so many other runners set to take on a marathon this year, Mark has had to get imaginative, adapting his plans around the strict lockdown rules currently in place.

Earlier this month, Mark spent an almighty seven hours running 1,293 laps around his garden, just in order to tick off one of his marathon routes. 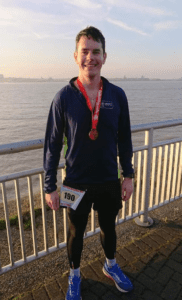 Having raised more than £6,000 already, Mark says there is no other option but to continue running his planned marathons, even if that means heading out into his back garden to complete the distance for cancelled and postponed events.

“I’d originally set a goal of raising £2,020 but people have been so generous, which is amazing but means there’s more pressure on me than ever to complete all 20 marathons!” said Mark, who is raising money for St Giles Hospice, a charity based in the West Midlands that supports and cares for terminally ill people.

“Coronavirus hasn’t just affected my running plans, but it’s had a significant impact on charities too, so that now, more than ever, it’s essential to do all I can to raise money for St Giles.”

St Giles holds a special place in Mark’s heart, having been the place where his uncle, Gez Brennan, received support after being diagnosed with liver cancer.

Gez, who was 61, died in February 2019 and Mark says St Giles gave him that vital help he needed at the end of his life. The Hospice offered a different outlet for Gez, who was an extremely sociable person, with classes and groups that he could go to.

“Gez didn’t have any children, so he treated us like his own, which meant we were extremely close” added Mark. “Obviously we visited him as much as we could but when we were at work, St Giles gave us peace of mind that he was still being supported.”

Mark said Gez would say he is crazy completing 20 marathons in 12 months but likes to think he is ‘watching from up there’ and proud of him.

Mark is running small routes every day to keep on top of his fitness, with near enough two marathons planned every month.

With the garden getting just a little repetitive, Mark is looking forward to taking on the Leicester race in October. All going to plan, the distance will be the 19th of its kind for Mark this year.

This year’s Leicester Marathon and Half-Marathon will be taking place on Sunday 11th October. If you’ve been inspired by Mark’s story and would like to sign up to the event, then visit leicestermarathon.org.uk

If you would like to support Mark and donate, visit justgiving.com/fundraising/mark-shanahan1