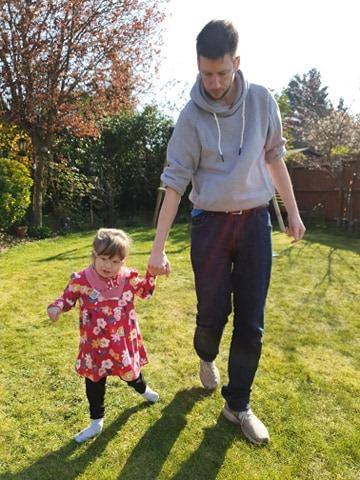 “This will be the first race that my daughter will be able to come and watch. To cross the finish line and have her there and to put the medal round her neck, that’s what I do all of this for.”

James Hollingsworth will be running the 2020 Run Leicester Half Marathon this year to raise awareness of his little girl’s extremely rare illness, Pitt Hopkins Syndrome.

Pitt Hopkins Syndrome affects just four in every one million, causing development delays and, sometimes, moderate to severe intellectual disability. Those with the illness often have delayed development of mental and motor skills, breathing problems, distinctive facial features and more.

Anna is now four-and-half-years-old, but her diagnosis didn’t come until 18 months ago. The first sign that something may be wrong came at Louisa’s 12-week scan, when midwives noticed a fluid-filled sac near to the baby and James and Louisa were told to prepare for bad news, as their daughter might not have even survived birth.

However, the sac miraculously disappeared and Anna was born a healthy baby. Everything seemed ‘normal’ until about 11 months after the birth, when the health visitor started to notice Anna was not reaching the expected milestones. From then on, the trio found themselves at regular appointments, learning each time about new symptoms and potential syndromes Anna could have. 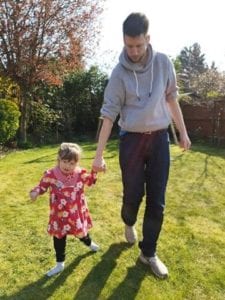 “We were thrown into this new life; before that, there was no need to know about any of these syndromes,” said James.

In November 2018, Anna was officially diagnosed with Pitt Hopkins Syndrome. It threw her parents, James and Louisa, into a world of total unknown, as they attempted to come to terms with the diagnosis. “The first feeling we got, was almost like a sense of grief.

“It’s a horrible word, ‘normal’, but I think as a parent, you picture all of the ‘normal’ things you will do with your child and the reality is, you might not do those things anymore.

“One thing I always dreamt about, was running with Anna.”

James decided to take up running in 2015, the same year Anna was born. He took part in lots of events and this year, thought it was about time he signed up for his local half-marathon

“Running helps me mentally,” he says. “For that time, I don’t have a phone on me and can just focus on running. It’s so good for my mental health.”

James said he runs every race to make his partner and daughter proud but the Leicester Half-Marathon will be extra special. Because of the crowds, Anna can’t come to my events usually – because every little sound can affect her. But with this being on our doorstep, she can come and watch me.

“Putting the medal round her neck and seeing her face light up, it’s what I do this for. It’s something that we can share.”

James still plans on fulfilling his dream of running a race with Anna, by pushing her round the Junior Park Run, in her specially adapted pushchair.

“I put all of my medals up in Anna’s room. Somehow, I feel like the medals keep the hope alive. They might not find a cure but maybe they’ll find a treatment.

“There is only so much I can do with hugs and love. There are times when the diagnosis can be truly heart-breaking, but we have to remain positive with hope for the future, and when Anna giggles or smiles, it just reminds me of the reason I am pushing myself to be stronger for her.”

James will be running the Run Leicester Half Marathon to raise money for Pitt Hopkins Research Foundation.

You can support James and donate by visiting: www.justgiving.co.uk/anna-hollingsworth

If you are feeling inspired by James’ story, then why not Run Leicester yourself?  Click here to register now.